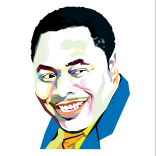 Of All The Days To Go To the Stadium

Last Saturday, I was at the old National Stadium, Surulere with my elder brother, Obi. He’s something of a fitness nut and he makes out time each weekend to work out at the boxing gym there. Who does that, right? Having first driven from his house in Lekki to my hovel in Surulere, he attempted to forewarn me about the crowd but nothing I heard could have prepared me for what I saw. My brother joked that it was akin to the crowd at Redemption Camp,  headquarters of Redeemed Christian Church of God (RCCG) during their monthly Holy Ghost services. Perhaps it was but I have always known well enough to avoid the Lagos – Ibadan expressway on service days so I have never witnessed it firsthand. The closest I have come to seeing such a mammoth crowd was as a younger man attending the West Indies Carnival at Tafawa Balewa Square during Easters past.

The most notable difference on Saturday was that these people were not smiling.  It was evident from the grim determination on everyone’s faces that this was no joke. Throngs of sportily-clad people, young and old, milled in and around the stadium. A number of the people I saw were old enough for me to have to ask an Immigration officer if these people were current Immigration employees coming out for a weekend run-about. Quite frankly, some of the people I saw looked to be mid-career folks at least. Puzzling when you consider this process was for entry level employees.

What I Learnt At iDEA Hub

I was invited to a mentoring session at the iDEA Hub last week. The mentoring panel comprised Eghosa Omoigui,  and Helen Anatogu. Eghosa is the General Partner at Echo VC and Helen is the Legal Manager West Africa and Angola at Microsoft. It was time well spent. In addition to meeting Eghosa and Helen, I also got an opportunity to work out of the hub for a day, something on my bucket list. It was quite an enlightening experience for me. I met Joshua, an intern with iDEA, who had so many business ideas but still found it hard to comprehend how founders convinced fellow graduates to shun Corporate Nigeria and work on a startup idea for little or no pay. I also met Gabriel, a web developer, who while attending courses to earn his professional certification as a stockbroker pitched the idea of an online training portal to the firm handling the courses. He met resistance but, undeterred, he went ahead and built the website all the same, using that as a proof of concept to convince the head of that firm to award him the job. Then there was Okoro (not his real name) who was a competent developer but lacked any modicum of business acumen. He had teed himself up to be rimmed by an investor who was demanding 60% equity in order to provide N400k out of a N5m ask. That’s some real life Alien vs. Predator stuff right there.

Quick Fact: Did you know it costs just N9,500/annum to work out of the iDEA hub? You get fibre broadband, all day electricity, collaborative workspaces and access to professionals (for a subsidised fee) and high quality mentors. All that for less than N800 a month. Sweet!

Besides meeting these three, I walked around a few times, just to listen to chatter and spy computer screens. This is hardly the scientific method but it was enough to leave me with an impression.  Here were people who had been provided with blazing fast internet, in-house lawyers (and other professionals, I assume), electricity on tap and kindergarten-themed wall paint yet quite a few were keeping busy by reading blogs, listening to music, or streaming movies. Self-directed work does not come naturally to many people. Later that evening, I had the opportunity to discuss my thoughts with Femi Longe, co-founder of Co-Creation Hub,  when we met up at EzWASHnDRY‘s tech networking event. He did not agree with me on everything but we found lots of common ground.

I love startups so I do not point this out to ridicule anyone, however, it highlights an often overlooked truth. Startup founders are not superhuman and can be quite fallible at times. They do not have all the answers and sometimes you can drive a truck through their blind spots. However, they are focussed and determined, possessing a quality which has been described as stick-to-it-ness. They also have a somewhat contradictory quality which can be called paranoid confidence, drawing a fine line between paranoia and confidence which gives them the impetus to forge ahead while remaining vigilant and realistic. I will refer to these qualities a little later.

[Another] Brief Treatise On Collectives

A bit has been said already about the potential evils of incubators/accelerators and it elicited significant responses from cognoscenti. There is an experiment I will be running by Q1, 2015. It borrows heavily from what works best in the opposing systems of Communism and Capitalism to arrive at a hybrid. For want of a better word, I have called it The Collective. Think of it as a community of practice for technology enthusiasts with an entrepreneurial bent. It will have functional groups such as Design, Hardware, Ergonomics & User Experience, Server Engineering, Networking, Web Development, Android, WP8, Legal & Accounting, Sales & Distribution, and on and on. Each functional group will be seeded with one or two more experienced individuals to reinforce positive peer pressure and keep everyone focussed. We all sign a 3-year contract to contribute up to 30% of our revenues to the collective to offset operating expenses. Note this is revenue and not necessarily equity. Teams can be created and disbanded on the fly as current realities continue to shape creative thinking and any equity grants within a team come with a 6-month cliff and 2-year vesting with single-trigger acceleration for situations like relocation from the hub or termination. My thoughts on this probably deserve a dedicated blog post.

Was It For Money?

I have read reports that seven people died on Saturday and a further 40 suffered injuries in Abuja where the Immigration entrance exam was concurrently held at the National Stadium. It makes you wonder what – if anything – could have made their sacrifice worthwhile. Perhaps it was the remuneration on offer.

Somehow, I don’t think so.

Above is the salary structure for civil servants in Nigeria. Graduates join the ladder at Level 8 and earn a grand total of N655,384.00 per annum. Not bad but hardly a king’s ransom.

Saturday will go down as a sad day in the history of Nigeria but in a counterintuitive way, I am very encouraged by what I witnessed. I read an uncharitable post about how Nigerian youths are lazy and I simply could not disagree more. I think back to Saturday and my immediate reaction when I saw the crowd in all its glory. My first instinct was to head back home. I had given it a good shot, after all. What prevented all these youths from heading back to their homes, I wonder? It was definitely not their overwhelming laziness. In my mind, they demonstrated both a single mindedness and a tunnel vision which are the hallmarks of all that is great and good about youth. Any more experienced person would have entertained doubts about the ability of the motley deployment of Immigration officials to conduct any sort of credible exam for such a crowd of people. Youth laughs in the face of such cold, hard reason.

What Does It Mean To Be Unemployable Anyway?

So much has been said of the poor quality of Nigerian education but one thing is certain; we build tough, dogged graduates around these parts. People undaunted by competition, who see a one in one thousand chance as acceptable odds. Lifelong civilians who have embraced change and demonstrated a willingness to rise to the challenge of working for a paramilitary organisation. People who have enough belief in the system to go this far. A system so many others have given up on. If I did not know any better, I would say these people could have just as easily become startup founders. 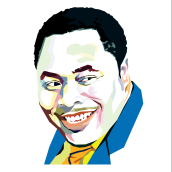