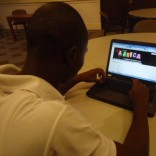 The Infinix Hot 2 is Google’s attempt to bring the Android One programme to Africa and is now in four African countries – Nigeria, Kenya, Egypt and Ghana. The device is priced at about $89.

The device comes in two different variants – 1GB RAM & 2GB RAM but the two variants come with an inbuilt 16GB ROM which means you need not worry about memory card initially.

The Inifinix Hot 2 comes with an 8MP AutoFocus which is actually 8.3MP and support other lower version if at all you want to consider switching to other lower pixel ratio while on the rear while the front facing camera (suitable for selfies and mobile video chat) is 2MP (precisely 2.4MP and also support other pre-existing version) which is stable compared to previous version and some other devices with 0.3MP, this I noticed is common to almost all other devices, I said almost, please note that and not all. It also has a good video spec to do a nice and quality video coverage with a good support of 1080p HD coverage with further support for 720p HD and 480p SD for the back camera for video coverage while the front camera which is aimed at taking selfies supported the following format CIF,QVGA and QCIF. So if you are a shutterbug and images are your thing , I think you might need to give this device a shot.

This device comes with a 5″ screen, though I initially disagreed with the that fact simply because its bevel has got a really big size which reduces its official screen to 4.8″ but I later discovered that with respect to the usage in this part of the world where new consumer behaviour tends towards multitasking and in a situation where you are currently running an app on the screen and need to do something that requires the use of your two hands, the bevel accommodates the consumer to hold the device and be sure that the running app is not disturbed while doing other things.

The device is loaded with an inbuilt device manager, which is officially turned on and I believe it is intentional because I discovered that people usually don’t bother utilizing this particular feature. This, along with the need to make use of the GPS in the smartphone so that the device can track via Android Device Manager provided you sign in with your Google account. It does this intermittently every 5-10 minutes.

There is no email app that will accommodate other email service provider from the likes of Hotmail, Live, Yahoomail to mention a few, but in other not to force an individual to open Gmail account because of the fact that they bought an android device, hence the need for only one app that will accommodate the work of the former existing email app and that is the New Gmail app which gives everybody to login more than one account and also accounts from other service provider.

WHAT IS MISSING AND WAY TO MANAGE THEM

The device does not come with a file manager though, but there are many third party applications that can manage that situation well and can be gotten from the Google Play store. The likes of X-plore, CM Manager and some other apps will make that easier. Gallery/Picture viewer is also missing from the device but not really like it is totally missing, but it was changed to Google Photos instead of normal gallery that can be found in other android devices.

Photo, taking the place of gallery further categorises the pictures based on the sources, like camera (i.e. pictures taken from the smartphone camera either front camera or back camera), WhatsApp (i.e. those Video and Multimedia images been shared via that platform).

The official video player that comes with the device is the infuse into the Photo but if a third party apps like DICE Player, MX Player, VLC, to mention a few among as many on the store will makes more sense if one want to enjoy the smartphone.

The Messaging App that comes with the smartphone is another thing to be worried about as one cannot copy a number if it was sent via text message. SMS cannot be sent from the device except a particular SIM is assigned for SMS. Multiple messages in a message thread cannot be selected and this is probably the most used inbuilt app that all the consumers use

NOTE: If you are unboxing your own AndroidOne Infinix Hot 2 (X510) Kindly make sure you do not use memory card at first while unboxing the device. The reason is that if you insert memory card while unboxing it, the internal memory of the device will not be activated and it will remain idle not until the smartphone is reset and hence do accordingly.

Is there something I missed out? Do not hesitate to drop us your comment. Share the knowledge, let others benefit from this if you learnt something new.

If you have any device in mind that you want us to review kindly drop us a comment below and we will be glad to do justice to such device.

What Exactly is Google’s Android One About?